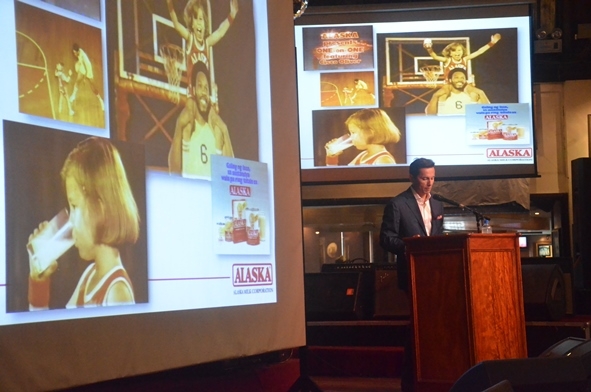 Milk and nutrition are almost inseparable.  An essential element to growth and development, milk is big business.  For Alaska Milk Corporation, one of the country’s largest dairy manufacturers, however, they are not just selling milk, per se.  They’re in the business of nutrition.

“Alaska knows health is the biggest wealth.  It is the journey to a stronger nation, that is through nutrition and active lifestyle,” said Wilfred Steven Uytengsu, President and CEO of Alaska, speaking to a full house at the PANA general membership meeting.

But, while nutrition is a good sell, adding sports into the mix changes the game altogether.

‘What’s up, man? Alaska, man. Masarap?’ quipped Alaska’s main man, eliciting chuckles to those that remember the memorable lines from Alaska’s classic TVC in 1975.  The ad, featuring Cisco Oliver and Uytengsu’s brother, heralded the milk company’s entry into sports marketing.  It was the year Alaska did the math and found it cost effective to pursue a franchise with the Philippine Basketball Association.

“Sports is a metaphor for life and for business.  Outdoor play and sports has an important role in stilling the values of discipline, hard work, teamwork and determination in youth. These are fundamental values that develop character and creating well-rounded individuals,” added Uytengsu.

The Alaska Aces basketball team placed the brand in front of thousands of cheering fans every week.  But does sports marketing really deliver the results?  “Being in the PBA does not project what the brand message is, unlike a TVC,” stressed Uytengsu.

“You cannot predict the outcome of the game.  ‘What if you lose?’  We had to struggle in a league with very formidable opponents,” he added.

Alaska had to make the PBA team function as a marketing team.  To extend its KPIs on and off the court, the team went on roadshows, trade events, and the like.  Alaska employees were deployed to cheer for the team.

Despite all the foundation building, however, sports offers no guarantee of success.  It would take Alaska more than a decade to clinch the championship, bringing home the trophy in 1991.  “The 90’s were kind to us, and we were declared team of the decade,” shared Uytengsu.

Today, Alaska Milk is synonymous to sports.  Aside from basketball, the brand is strongly pushing football, (called soccer in the Philippines).  This year, it is holding the 18th Alaska Cup.  This same tourney produced Borromeo and Del Rosario of the Philippine Azkals, the national football team.

Alaska also brought the Iron Man franchise in to the Philippines.  Iron Man is a triathlon that has requires athletes to swim 4 kilometers (k), bike 100 k, and run 42.2 k.   Alaska’s running the show—from Iron Man, to Iron Kids Philippines, and coinciding with World Milk Day, the Family Run.

“Families must enjoy time together.  We want people to embrace a healthy lifestyle instead of being on Facebook,” said Uytengsu, who is also Chairman of Sunrise Events, Inc., and President of GenOSI.  Both companies organize the local competition of these global franchises.

Uytengsu delved deeper into what makes sports marketing tick, saying, “Sports is aspirational.  It is not just for the affluent consumer.  Sports captures the hearts of individuals from CEOs to doormen, even including celebrities.”

“You suffer for a day, and brag for a lifetime,” he added.

Alaska Milk Corporation has grown with its sports marketing strategies, learning that as the economy continues to grow, as disposable income grows, so does the opportunity to engage the individual.

“Sports marketing is just complementary.  It is not the sole component to engage the consumer.  It’s a philosophy of the way we work on Alaska Milk, that we can endear ourselves to the consumers,” he explained.

“We are fortunate to be in the dairy business.  It is natural for milk to provide the nutrition necessary to the youth, who will later on become productive citizens.  Alaska has a consistency and singularity of message, and of staying the course.  And, we are committed for the long haul,” said Uytengsu.