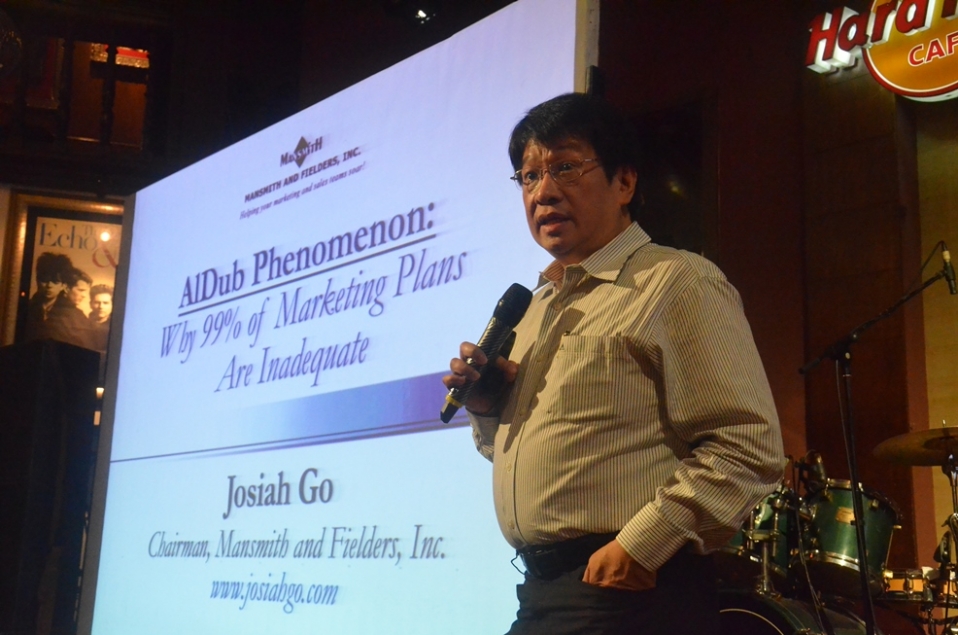 Recently at the PANA GMM, renowned Filipino marketing guru Josiah Go talked about marketing from a truly interesting perspective.  That is, to analyze within the purview of the current media darlings ‘AlDub’.

The topic alone sparked record-breaking interest.  The October General membership meeting got 256 attendees—the most number in PANA GMM history.  Where else can you get the best of marketing strategy and insights on the country’s latest media celebrities?

Bestselling author Josiah Go is the Chairman and Chief Marketing Strategist of Mansmith and Fielders, Inc. (the leading marketing and sales training company in the Philippines), Chairman and CEO of Waters Philippines (the market leader in the direct selling of premium health durable products in the Philippines) and President-Commissioner of PT Noah Health Indonesia. He is Chairman / Vice Chairman / Director of over a dozen companies.  – From Josiah Go website

AlDub on the other hand, is the Eat Bulaga ‘kalyeserye’ sensation that has broken all social media/Twitter records for unique/organic tweets, and has even achieved its own mention on the BBC.  Al for Alden Richards, and Dub for Maine Mendoza’s character Yaya Dub, AlDub is a phenomenon whose origins are as plain and simple as a love for values—young love, and good, old-fashioned, clean fun.  And, nowhere in the world is this so rich and ripe for the picking but in the Philippines, with its sweet spot of youth and optimism.

Josiah Go’s ingenious use of AlDub to home in on marketing strategies that need over-hauling is no different from stale, predictable TV shows that are in dire need of a boost.

There are four major marketing types, namely: Sales-, Market-, Customer-, and Market-driven strategies.  However, according to Go, “99% of marketing plans are Inadequate.”  How so?  Brands seem to be stuck on the decision of being better versus being different.

To the fans of AlDub, the marketing is unquestionable.  They simply loved. It.  Kudos goes to Eat Bulaga for tapping, and winning, the majority of the non-users, and the un-served.  Or, in branding speak, “Not my market”.  Perhaps, marketers try to think of the majority of non-users that they are not servicing.

As Go explains, being better is only as good as the model is practiced.  Being different has its logic of strategy.  Citing the Mang Inasal brand’s strategy, Go shows how the QSR brand started doing business differently. By still selling chicken—Filipinos love chicken!—Mang Inasal served a choice outside of the usual fried favorite.  Grilled chicken offered a variety that is not like any other in the same category.

Another example is Starbucks.  This global brand stood out of its competition when it stopped doing something—and that is, Starbucks removed its kitchen.

Go compares this with the AlDub phenomenon.  First, AlDub stopped doing a number of things so commonly identifies today as must-haves.    First off, AlDub did not employ expensive superstars of the mestizo/mestizo quality.  Next, it took out the sexy bits, and the trash-talk, both qualities so often tied hand-in-hand with marketing to the youth.

Go also talks about avoiding the mob.  In its early days, AlDub (tried) to avoid the coliseum act—that frontier of blatantly using mob-mentality to make a point.

Lastly, and perhaps most importantly, AlDub chucked the script.  In so doing, Alden and Yaya Dub adlibbed their way into the hearts of millions of people.  Live, heartfelt, and so in the moment, AlDub says: “I am you.”  This is a message that resonates with millions of Filipinos.

Counterpointing what AlDub and its producers stopped doing, are things that they started doing.    Top on the list is entertainment-and-values.  A tough act to do, considering producers and networks want to earn (who doesn’t?)—values are so often stricken from the list of to-dos. AlDub’s good, clean fun has since earned them a Catholic Mass Media Award, one of the country’s most prestigious.

Next up, AlDub went to the streets.  And, no, not in the 70s protest manner, but to talk to the common tao.  According to Go, AlDub created a kalyeserye that spoke to, and connected with people.

It’s also good to mention that AlDub and its creators admitted what they didn’t know.  That is, how to connect to the youth.  Says Go, “AlDub hired social media for TV, and made use of the new, social media tweets.”

Lastly, and very unspoken, “AlDub started using (the method) of Underdog caregiver.”  This hits the spot with many Filipinos, obviously.

On a technical level, Go also specifies how AlDub’s use of Split-screen provided TV viewers a sort of 360-view of the unfolding drama.