In the Asean Cities of the Future, Bands Should Think Small for Big Growth

You are here: Home » Industry News » In the Asean Cities of the Future, Bands Should Think Small for Big Growth

Manila, PHILIPPINES, 27 APRIL 2015 – While Asia’s future megacities attract significant attention when it comes to the city trends shaping the region’s future landscape, the projections for ASEAN (the Association of Southeast Asian Nations) tell a different story, with close to two thirds of the region’s urban population (62.6%) forecast to reside in cities and urban centers of under 500,000 by 2025, according to a new report from global performance management company, Nielsen.

The Nielsen report, The Age of ASEAN Cities: From Migrant Consumers to Megacities, which examines the influences that will shape development in the ASEAN region over the coming decade, identifies increasing business activity, cross-border trading and demographic shifts as some of the key forces driving population growth in ASEAN’s smaller cities, emerging towns and rural areas which are considered the ‘sleeping giants’ of the next decade.

While many consumers will continue to gravitate to mega and super cities (32% growth in the next 10 years), the biggest population growth will occur in cities with populations between one million and five million. Across ASEAN, the combined population of these cities will increase by 51% between now and 2025, from 34.9 million to 52.6 million people. Meanwhile, the population in large towns and small cities of less than 500,000 will increase by 18% to 231.8 million which, when combined with the estimated 324.3 million rural population, will account for around 80% of the ASEAN population. (See chart 1).

For marketers and brand managers, the smaller population centers throughout the region are important growth markets, with healthy demographics and an emergent middle class.

Nielsen Southeast Asia, North Asia and Pacific Regional Director, Client Services, Regan Leggett said looking beyond ASEAN’s megacities to understand future consumer ‘hotspots’ was the most powerful starting point in identifying emerging economic opportunities and the strategic approaches and segmentations needed to approach new markets. He called out Johor Bahru and Kota Kinabalu in Malaysia and Cebu in the Philippines as examples of regional cities with burgeoning potential.

“New consumption hotspots are emerging across Southeast Asia, such as clusters of industrial estates where manufacturers are leveraging cheaper land and labor,” notes Leggett. “This in turn is having a knock-on effect of attracting migrants and stimulating local economies.”

The Nielsen report also highlights that the conditions which are prevalent in local areas, such as infrastructure and transport and access to technology and education, have a significant influence on consumer behavior and patterns. As ASEAN’s smaller cities and rural areas continue to become more developed, their populations are increasingly well-educated, have higher levels of disposable income and are more aware of trends outside of their local marketplace.

“There are considerable rewards on offer across ASEAN’s rural populations as spending power increases,” emphasizes Leggett. “Many of these consumers are at the very beginning of their relationships with packaged and branded goods, and even a modest growth in spending power among such a large population equates to notable revenue potential.”

In order to tap into these markets brands should focus on product innovations which cater to the challenges, lifestyles and requirements of rural and small city consumers,” continued Leggett. “Smaller product sizes or single-use portions appeal to shoppers with growing purchasing power and traditional trade retailers who are challenged with storage space.” 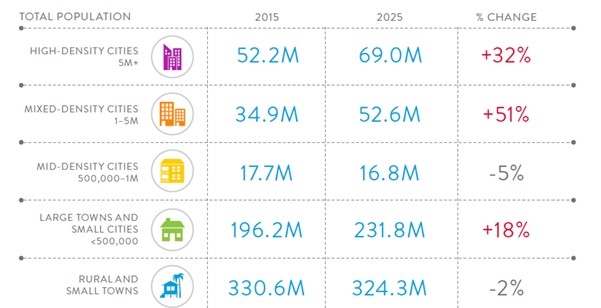