According to a survey by Kantar Worldpanel, the world leader in consumer knowledge and insights based on consumer panels, despite good economic performance in 2014 (GDP growing by 6.1% according to NEDA), Filipino consumers described their purchasing ability at par with 2013.

This study was based on the research extracted from the Kantar Worldpanel Philippine’s regular consumer panel survey. Kantar Worldpanel tracks the shopping behaviour of 3,000 homes in urban and rural areas across the country. Last December 2014, these homes were asked to answer survey questions on their purchasing ability for the year.

Almost half (48%) of Filipino consumers feel that their household purchasing ability is no different from that of 2013. Only a few homes (27%) said that their purchasing power has improved, while 24% said otherwise. These insights were reflective of FMCG sales in 2014 which only grew by less than 1% (-0.02%).

Class D& E homes were slightly less optimistic with 25% and 24% of those surveyed viewed that their purchasing ability has diminished compared to 2013, while 19% of upscale homes (Class ABC homes) believed they their buying power has lessened.

When asked what factors affect Filipino purchasing capability, the top ranking concern (61%) is the rising food and commodity prices, while the second factor is attributed to high cost of electricity or water (10.4%). With typhoons such as Typhoon Ruby and Yolanda that have devastated livelihoods in the past years, concerns about natural calamities also surfaced (5.6%). Rising fuel prices and health concerns came in 4th and 5th, respectively (5.2% & 4.5%, respectively) . 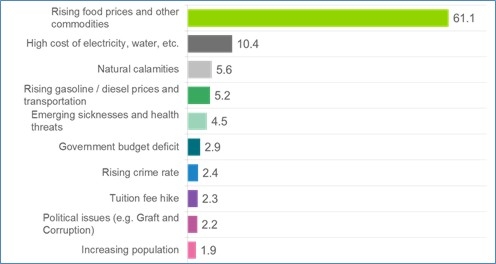 Despite the listed concerns that affect Filipino purchasing ability, there are items that households seemed to have spent more on in 2014. Among all households, increased spending for  items such as food, fuel light and water, education, non-alcoholic beverages, and transportation was surveyed.

Upscale homes increased spending on fuel, light and water more than food, while downscale homes see their food budget as top priority. It was noted that the ABC homes have given more priority to communications (calls/texts) spending as opposed to DE homes that see non-alcoholic beverages as more important than calling or texting.

Most Filipino consumers foresee no change in their purchasing power in the next 6 months. However, 44% of homes are optimistic about their future spending: 47% and 43.2% within upscale and downscale homes, respectively, see a better outlook on their purchasing ability in the coming months.

“Despite a slump in global FMCG consumption, the future looks bright for the Philippine FMCG market. The consumers’ optimistic outlook reflects a more prosperous economy in the months to come,” Lourdes Deocareza, New Business Development Head for Kantar Worldpanel said.