You are here: Home » Industry News » Filipino Consumers Tie with Indonesians as World’s 2nd Most Optimistic in Q4 2014

Manila, PHILIPPINES, 26 JANUARY 2015 – Filipino consumer confidence surges to a five-point increase in Q4 2014, pushing the country to the number two spot with Indonesia as the most optimistic countries globally, according to the latest Consumer Confidence Index released today by Nielsen, a global information and measurement company. The Nielsen Global Survey of Consumer Confidence and Spending Intentions also reveals five of six Southeast Asian markets register a confidence index above 100 percentage points (pp). Consumer confidence levels above and below a baseline of 100 indicate degrees of optimism and pessimism.

With an index score of 120 points, the Philippines reaped one of the largest quarterly increases globally (+5pp per last quarter). The Philippines now shares the second spot with Indonesia, with an index score of 120 in Q4 2014 (-5pp compared to previous quarter). India holds on to number one with 129 (+3), the highest index across the 60 countries measured.  Thailand came in fifth with an index score of 111 (-2pp versus last quarter). Consumer confidence levels in Vietnam (106 points, +4pp) and Singapore (100 points, -3pp) also remain relative strong. In contrast, consumer confidence in Malaysia stood at 89 points, which was down 10 percentage points on Q3, the largest quarter-on-quarter decline globally and seven points below the global average of 96 points. (See Chart 1).

“The spike in consumer optimism is a result of several key developments,” observes Stuart Jamieson, managing director of Nielsen Philippines.  “One of which is the continuous expansion of the business process outsource (BPO) industry which provides the bright spot in the Philippine economy. Related to this, unemployment was also found to be at its lowest in 10 years as a result of a growing economy. Such factors are major influencers in further expanding the middle class or the new consumer class who spend on technology, real estate, consumer and retail goods, and travel.”

The Nielsen Global Survey of Consumer Confidence and Spending Intentions, established in 2005, measures consumer confidence, major concerns, and spending intentions amongst more than 30,000 respondents with Internet access[1] in 60 countries.

SAVING AND INVESTMENT CONTINUE TO BE A PRIORITY

While 79% of Filipino respondents feel bullish about the state of their personal finances over the next 12 months and 50% perceive that it is a good time for people to buy the things that they want and need, Filipino consumers along with consumers across Southeast Asia continue to be among the world’s most avid savers. More than three in five Filipino respondents (63%) say they prioritize saving their spare cash, compared to 69% of consumers in the region and 43% globally. Consumers in Vietnam are the highest globally (77%) when it comes to savings, and Indonesia ranks third globally (70%). Consumers in Malaysia (67%), Thailand (63%) and Singapore (62%) follow closely.

Besides savings, consumers in Philippines (32%) along with those in Singapore (31%) are focused on clearing their debts and loans while about a third of Malaysians (33%), Indonesians (32%) and Thais (30%) are channelling their spare cash into stock/mutual funds.

“It is a positive indicator of financial health when you see consumers who are conscientiously planning their financial future,” says Jamieson. “As disposable income becomes more readily available than before, consumers have the capacity to boost their savings and to invest their spare cash, driving greater demand for banking and finance services.”

Jamieson clarifies that while establishing financial security takes center stage for consumers in the Philippines consumers are spending to a degree. After putting spare cash into savings, 35% (-2) of Filipinos spend on new clothes, 32% on home improvements (+3), 29% on holidays (+1) and 29% new technology products (+1). (See Chart 2).

The Nielsen survey also revealed that at least eight in 10 consumers in the Philippines (80%) have adjusted their spending habits over the past 12 months in a bid to curb household spending. More than six in 10 consumers in Philippines (62%) are spending less on new clothing in their effort to reduce household expenses. Other areas where consumers are cutting back include saving on gas and electricity, delaying upgrading of technology, and switching to cheaper grocery brands. (See Chart 3). 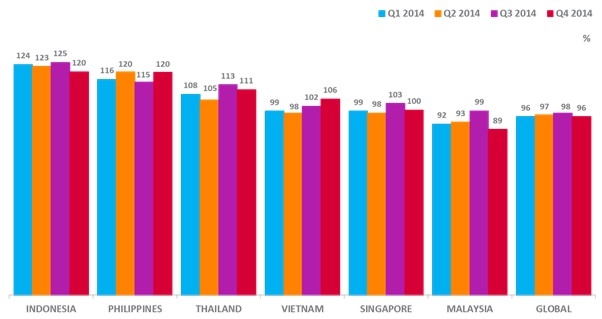 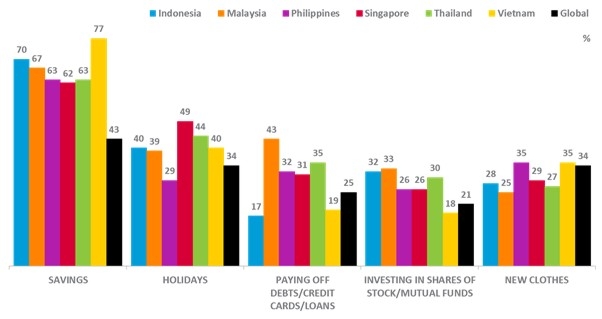