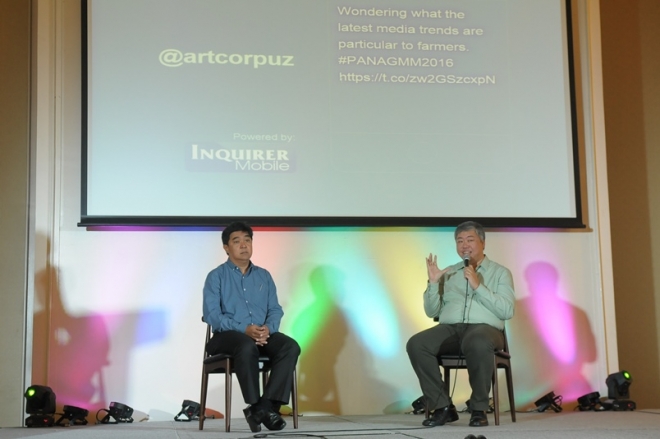 Turning the key to a new year is best done armed with good information, supported credibly by numbers.  At the PANA GMM, General Manager of Kantar Media, Gabby Buluran, and General Manager of Strategic Consumer and Media Incites, Jay Bautista delivered on the numbers.

Is disruption merely innovation?  According to Buluran, “the word Disruption has evolved and derived new meaning in the last 3 years.  Unlike innovation disruption takes a left turn, by literally uprooting and changing how we think, behave, do business, learn and do about day to day.”

Traditional media: Radio, TV and print media are still linked to digital.  In the UK, TV drives Twitter where 40% of Tweets is spun off TV.  Relatively, an increase Tweets spurred TV viewing.  Kantar’s study conducted June 2012 to November 2015 showed an average TV viewing at over 200 minutes, with the lowest in January 2015 at 168 minutes against October 2015 at a high of 236.  “TV reach is on a high end at 95% reach at end-2015,” said Buluran.

In Urban PH, Radio still has an average weekly audience reach of over 20M, with Mega Manila accounting for 15M listeners.  It’s not the same picture though where Cebu has only 893 thousand, Cagayan de Oro (CDO) at 440 thousand or barely half, with Davao trailing at 345 thousand.

If Radio provides bookends reaching 4M around 6am, and 2M at 9pm, TV comes with the meals spiking at 8M at 12 noon, and 14M at 8pm.  “Home radio listening retains its loyal morning listeners and is developing a new late night audience in Urban PH.  Radio reach like TV looks stable.”

Of Print, Buluran said, “It is the most adaptable of the traditional media.  Its print nature makes it last longer because of access to back-read.  And, most print publications have digital forms.”

“Traditional is under siege.  So far, it has withstood digital, but it did not come easy.  The audiences are consuming content on other platforms.  But, traditional media is learning how to adapt, and is coming up with better content.”

The consumption of media—traditional and digital—is clearly demographic.  This particular item from Buluran’s Kantar Media numbers garnered significant reaction: The Most-missed Media device, by age.  According to the survey, around 60% of those aged 65 to 75+ will miss their TV most; compared to only 17% of those aged 16-24.  This age bracket registered 59% would miss their mobile phone the most, slightly higher than their 25-34 counterparts where 50% rooted for their mobiles.  Said Buluran, “The big divide is age 44.  Younger than 44 will miss their mobile phones, and older will go for their TVs.

Jay Bautista referred to media research groups echoing what ZenithOptimedia estimates, “Ad expenditure in China, Indonesia, Malaysia, Pakistan, Philippines, Taiwan, Thailand and Vietnam (Fast-track Asia) is seen to grow 8.9% in 2015—at an average rate of 8.4% per year from 2015 to 2018.  Moreover, mobile advertising will be at 71% by end-2015, at forecast average annual growth rate of 32% per year from 2015 to 2018.  This will be driven by the rapid spread of devices and improvements in user experiences.  By contrast, desktop internet advertising is set to grow at an average of just 1% a year.”

In Bautista’s talk, the Southeast Asian scenario is rosy—with Asia Pacific leading the digital shift—forecasting 30% GDP growth in digital technologies (mobile internet, e-Commerce, cloud technology) by 2025.  Asian brands are riding the digital tide in response to consumer demand, as well as returns on digital investments estimated to grow more than 13% by 2017, an increase of 7.6% in 2015.

At the heart of the matter is what drives the digital demand.  While Buluran stirred the pot on the tenacity of traditional media with the audience ages of 45 and beyond, Bautista served the sauce on millennials born 1981 to 2000. Bautista’s profile of online consumers show 80% at 10 to 19 years, 70% 20-29 years, and 39% 30-39 years.

That age group, signifying 40% of the urban population, equivalent to almost 20M, is behind the Philippines’ being the 3rd largest smartphone market in Southeast Asia.  2015 data shows Mobile media reach to millennials is 95% against 79% of the general population, where 95% of millennials own and use a mobile phone.  Outdoor (OOH) media hit 72% of millennials, and the Internet hit at 54%.

Forward to present-day 2016, and expect to see more minutes spent, and material consumed, via online videos.  ‘I’m glad that the Philippine Star, the Inquirer and even Rappler, are already using video as part of their news content sharing online.  The Philippines spend 5 minutes on news-related video, which is quite long,” Bautista shared.  The research veteran though mentioned that there is a significant number of users that have shifted video watching from YouTube to those that are embedded in Facebook.   “We feel this will intersect, and we will see change in the trends in a few months,” he said.