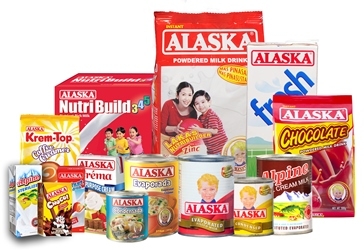 Founded by Mr. Wilfred Uytengsu, Sr. in 1972, the company was established with a generous vision to provide affordable milk products to the Filipino people. Starting from its initial product line of evaporated filled milk and sweetened condensed filled milk,  Alaska was able to effciently grow its portfolio to include powdered milk in 1896 and were the pioneers of the ready-to-drink milk  using the UHT-process that enabled milk to have a long shelf life as early as 1977. Continuing the legacy of its founder, Alaska Milk today provides affordable nutrition across different life stages to every Filipino family – nurturing, caring, reliable and trustworthy.

The sweet success of Alaska Milk led to the transformation of a family-owned entrepreneurial company to a publicly listed company in 1997 and a P15.0 Billion corporation by 2012. Despite the challenging years in the economic conditions of the Philippines, Alaska Milk did not lose hope and instead continued investing in the brand, getting ready for the good times ahead. In reality, Alaska Milk’s story as a company is one of  “David and Goliath.”  Multinational companies were the Goliaths with their huge advertising budgets and global resources.

Noteworthy, Alaska Milk would not have achieved its place today if not for its  wise choices – efficient,  innovative and focused. Even today, Alaska Milk continues to chose few but impactful initiatives, meticulously planned high potential product launches, integrated sales and marketing programs carrying one effective and solid message. Amidst limited resources, the Company casts a giant shadow in everything it does, from its consistent brand image to its excellently executed activation programs nationwide and in the retail trade.

But perhaps the biggest secret of Alaska’s success lies mainly in its people, from its President down to the line workers in the plant to the utility staff in their basketball team.  Each team member in the organization delivers his/her role with passion and commitment, sparking  indeed the synergy within the Company.

For the past 40 years, Alaska has continuously espoused the highest level of work ethics which was the legacy of its late Chairman. The Company’s work environment is one that imparts the speed of trust in its pursuit of excellence. Led by its President and CEO, Mr. Wilfred Steven Uytengsu, Jr., value formation is the foundation of the Company. Teamwork, discipline, determination and integrity form Alaska Milk’s star values. This foundation has taken Alaska to greater heights, consistently delivering its goals.

Alaska Milk Corporation always believes that it charts its own destiny. Today, the Company embarks on the next chapter of its history, identifying new growth opportunities as it expands its businesses into new territories, plays in new platforms, launches new brands and competes globally on a world-class level.  Yet, always mindful of its role in nation-building – providing nutrition at all stages of life, promoting an active and healthy lifestyle while delivering sustainable profitability to its stakeholders.

The Alaska Team is consistently reminded by Mr. Uytengsu’s mantra that complacency is the biggest enemy of an organization. This mantra is inspired by a short and simple quote from Debbi Fields: GOOD ENOUGH NEVER IS.

And so, the journey continues for Alaska Milk Corporation. The best is yet to come.