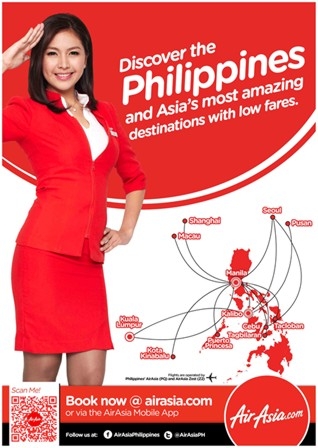 AirAsia Philippines (AAP) and Zest Air signed a strategic alliance in March 2013 allowing AAP to invest in the Zest Air Group by acquiring 49% of Zest Air. In the same year, Zest Air was rebranded to AirAsia Zest to reflect its partnership with AirAsia, the leading and largest low-cost carrier in Asia and voted as the World’s Best Low Cost Airline in the annual World Airline Survey by Skytrax for five consecutive years from 2009 – 2013.

AirAsia is the leading and largest low-cost carrier in Asia that services the most extensive network with 88 destinations. Within 12 years of operations, AirAsia has carried over 220 million guests and grown its fleet from just two aircraft to over 150. The airline today is proud to be a truly Asean (Association of Southeast Asian Nations) airline with established operations based in Malaysia, Indonesia, Thailand,  and the Philippines servicing a network stretching across all Asean countries as well as China, India and Australia.  AirAsia India launched its maiden flight this year while AirAsia Japan is set to begin operations in 2015.

AirAsia sees enormous growth potential in the Philippines with AirAsia Zest and AirAsia Philippines as their partners, especially with a population of over 100 million people across an archipelago of just over 7,000 islands, a landscape conducive to air transportation.

AirAsia Zest believes in providing convenient service to make traveling easier and more affordable for its guests. Guests can make bookings through a combination of the following: