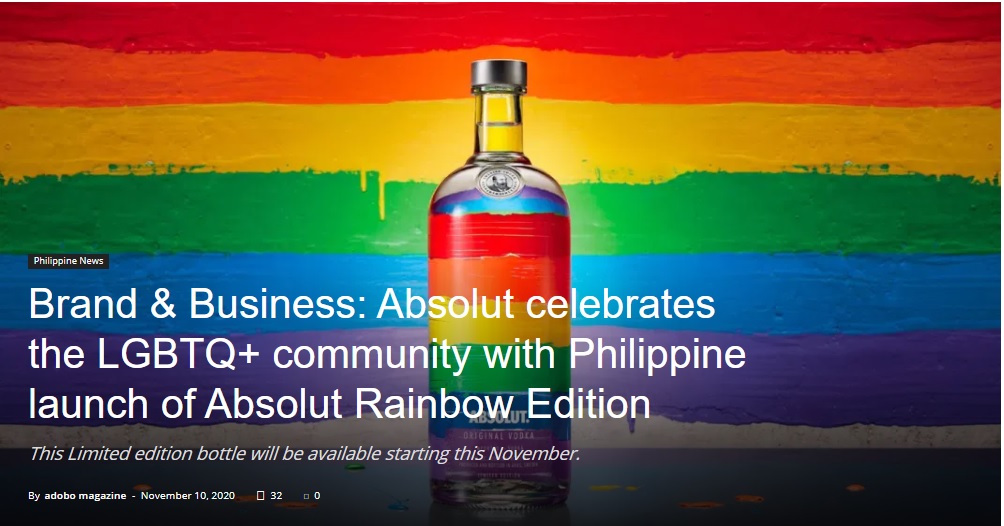 Although June is now known all over the world as LGBTQ+ Pride Month, celebrating the LGBTQ+ identity and community doesn’t necessarily have to be restricted to a certain time of the year. In order to create a world that’s equal for everyone, Pride has to be recognized and celebrated all the time.

It’s in light of this belief that Absolut Vodka is launching its Rainbow edition, a popular LGBTQ+ Pride limited-edition vodka bottle for the very first time in the Philippines this October. The bottle, first introduced internationally in 2008, features the vibrant rainbow design of the LGBTQ+ flag depicted in brush strokes, evoking the freedom and diversity of the community, as well as the brand’s artistic heritage. The bottle also features a “Taking Pride In Diversity” statement at the back, a rallying cry for equality.

“We’re really excited to show our support to the local and global LGBTQ+ community with the introduction of the limited-edition Absolut Rainbow,” said Frances Favila, Absolut Vodka Brand Manager. “Absolut Vodka has had a long history of LGBTQ+ advocacy, and with the numerous LGBTQ+ population here in the Philippines, it was only right that we celebrated their pride.”

Absolut Vodka has been a staunch supporter of the LGBTQ+ community since the early 1980s, with its founder LO Smith being a pioneer for human rights and an advocate for openness, diversity, and equality since the brand’s founding in 1879. Absolut was also the first spirits brand to have the Pride flag design on its bottle in 2008, through a partnership with the flag’s designer, Gilbert Baker.

The Absolut Vodka limited-edition Rainbow bottle will be available exclusively at all S&R stores for a suggested retail price of Php 599 for its 700 ml bottle and Php 779 for its 1L format starting this November 2020.